Using the Raspberry Pi from a Google Nexus 7 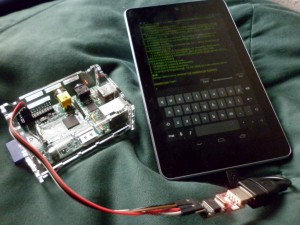 At last week’s Makers Monday in Maker Space Jon was trying to configure his Raspberry Pi using an Android phone across the network. It was just about working but it was not exactly smooth. This got me thinking so I tried a few experiments to see if there was an easier way of doing the without using the network, and there is.

At this year’s Open Source Hardware Camp I learned that the Raspberry Pi has a serial terminal enabled by default available through the the GPIO port. Clearly it is just a text terminal but is great for using the Raspberry Pi from the laptop without needing to set up a local network to do it. It needs a USB serial adapter that works at 3.3V but these are available as a module online for under £2.

I also learned from a demo by Lewis Baker at Datarama #16 that Android phones can be connected to the Arduino and communicated to over a serial interface. Naturally I wondered if the same could be said of the Raspberry Pi, and the good news if that it can.

You will need a Micro USB Host Mode OTG Adapter in addition to the USB serial module, again costing under £2, but that is it. Another nice little bonus is my serial adapter has a 5V output that can be connected to the 5V pin of the GPIO port and power the Raspberry Pi.

As for software there are many Android terminal apps, but few that recognise the USB adapter that I have. In the end I started using the Slick USB 2 Serial Terminal that has a few issues but was good for the test. I suspect I will end up producing my own app eventually.

After all this I decided to try and USB hub and connect a USB keyboard as well, and that also worked allowing me to use a normal keyboard and my Android based Nexus 7 as a terminal screen. Not the most useful setup in the world but I can see us playing with this in the future.

This entry was posted in Hacks. Bookmark the permalink.